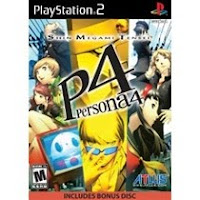 Shin Megami Tensei: Persona 4 is a console role-playing game (RPG) for Sony's PlayStation 2. Chronologically the sixth installment in the Persona series, Persona 4 is a suspenseful countryside murder mystery with multiple twists and turns in the plot that will have you guessing all the way to the end.

Battle-wise, Persona 4 lets you directly control the actions of other party members and continually exploit an enemy's weakness. Post-battle card shuffles have added Arcana Chance, which bring you good or bad status depending on the Arcana. Battles now occur after school instead of at midnight, like in Persona 3, giving the player less time in which to do social activities. This turns out to be significant because Social Links now have a greater effect on battle.