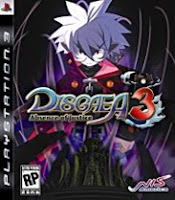 The third American release in the Disgaea series by Japanese game developer and publisher Nippon Ishi, Disgaea 3: Absence of Justice marks the arrival of this acclaimed and beloved strategic RPG franchise into the Next-Gen gaming era. A PlayStation 3 exclusive, Absence of Justice features high-definition graphics, including beautiful high-res 2-D sprite character art and stunning spell effects. And although it is the third in a series of games, its story and gameplay stand on their own, allowing players both new to and experienced with the humor, zany characters, thrilling action, and unmatched excitement of the Disgaea universe to jump right into the battle.

Set in and around the ‘Nether Institute, Evil Academy,’ the demon version of the preppiest of prep schools, Disgaea 3: Absence of Justice follows the puzzling decision of Mao, son of the Overlord of the Netherworld, who after reading a manga comic book decides to forsake his proper demonic upbringing, become a hero and attempt to overthrow his father. But in the backwards world of demon scholastics where good is bad and bad is good, Mao is a top honor student. He knows all about ditching school, being totally unhelpful and quickly resorting to violence, but nothing of the selfless nobility and patience of heroes. Heroes are for delinquents, as the number one delinquent of the Nether Institute, Raspberyl and her friends try to tell him. But Mao’s mind is made up. It's a hero he will be.