Finally, we will be receiving quantities of Mario Kart Wii next wednesday without the overinflated price. Seems like many vendors around the country are short, and Nintendo, in efforts to push their wii's at a dwindling $250, force official vendors to purchase more wii's to receive additional allocations of Mario kart, consequently driving up the price of mario kart. 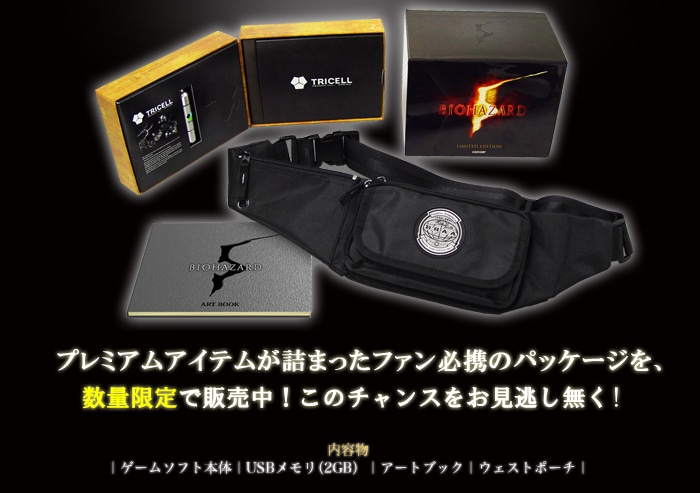 We will be receiving minimal amounts of the ps3 e-capcom biohazard edition mid next week. Our suppliers are currently scrambling another large order together to make a shipment by next monday so we have it by wednesday of next week.

This item is only available on e-capcom.com's website, with pre-orders closed back in mid december. Luckily, we were able to confirm a small amount.

The bundle includes:
We will be posting the bundle on the website as soon as the item arrives.
Posted by Kbody at 3/06/2009 01:36:00 PM No comments: Links to this post

First shipments of the new PSP 3000 Value & Core Packs of Vibrant Blue & Radiant Red are in stock. The box is absolutely beautiful, much more enticing than the previous non-carnival color box presentations.

Pre-orders for these two colors will ship today, with the next wave of Yellow & Green Carnival color PSP's arriving on the 19th of this month. Value pack features are as follows:

-from wikipedia-
7th Dragon takes place in the world of Eden of which 80% is ruled by dragons, so the premise of the game is simple: Kill all the dragons, or the human race is going to be wiped out of existence. When players start their journey, they can create their own characters from the following classes: Mage, Princess, Rogue, Knight, Samurai, Fighter, or Healer. Outside of battle the characters will be viewed traveling the overworld from an overhead perspective, while the battles are viewed from a side perspective showing each character as they attack their foes. The game is being produced by Rieko Kodama and the design team consists of composer Yuzo Koshiro, character designer mota, as well as monster designer Akifumi Yamamoto. At the helm of the project is the director of the first entries in the Trauma Center and Etrian Odyssey series, Kazuya Niinou.

Sorry folks, we're completely sold out of biohazard 5 PS3. Because of the high cost of the game, along with its proximity to its US counterpart, we will only be bringing in special orders. Earliest restocks are expected by mid next week.
Posted by Kbody at 3/06/2009 01:24:00 PM No comments: Links to this post

Similar to Neo Super Robot Wars Special Disc, this will feature exclusive missions, "Challenge Battles" (scenarios testing players' strategic/tactical decisions), a "Battle Viewer" (similar to Original Generation Gaiden's "Free Battle Mode"), a "Special Theater" displaying art work and concept designs for Z's original characters and robots and a library displaying all of the game's characters and robots. An exclusive unit to the disc will be a black Overman King Gainer by the name of "XAN". The disc does not feature the original game and most of the content will depend on how much the player has achieved in the original.