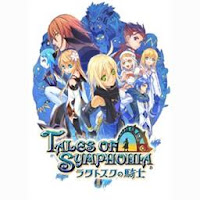 Lloyd Irving and his team started out on a mission to protect the most important person in the world to them, Colette Brunel. Accepting a mission requested by the Gods upon Colettes' birth, she embarked on a journey to restore the world of Sylvarant to its former peace and beauty. Soon, it was realized that the whole quest was surrounded by lies, treachery, and false hopes.

Colette was being hunted by assassins, angels, warriors, and beasts from a mysterious world but no one knew why. After losing many battles, Lloyd realized that he did not "know-it-all." Which led him to work even harder. He gave everything he had, not for the world...but for Colette.
Chaos was rapidly consuming the world. Labeled as criminals of Sylvarant, they had no choice but to escape to the world of Tethe'alla. In this new world, they uncovered new truths about Sylvant and Tethe'alla. They also discovered Colettes' destiny.
Angels who were worshipped by everyone, eventually revealed their true selves and had followed a single leader, who claimed to be "God." "God" used this title to fulfill his own selfish desire to reincarnate his dead sister, regardless of the cost.

Lloyd battled fiercely with all his heart. Using all the tools that he had learned from his journey, he defeated the one known as "God." The victory set Collete free from the evil grip of this false "God." They had finally acheived their original goal, which was to find peace and prosperity for Sylvarant and Tethe'alla.

Enter Emil Castagnier and Marta Lualdi, two orphaned children who have teamed up for one common purpose. To get revenge on the man who killed both their parents, Lloyd Irving.

Tales of Symphonia: Knight of Ratatosk, brings a whole new story. There will be several new characters. Gameplay will be a new experience because of the Wii's unique controllers.

PS3 - A look into Senjou no Valkyria - Available April 24th

A war has broken out in the country of Gallia. They are constantly attacked by both the East Europe Empire, and Atlantic Ocean Federal Organization.
Both factions are at war for Gallia's high abundance of Ragnite ore, a very powerful mineral that can be used for fuel.

Gamers get to play as a Gallian soldier. You take control of characters including: Alicia Melchiott, a mid-range rifle soldier and Welkin Gunther, a tank commander.

In this game, you will have to fend off violent enemy forces, protect your country, and lead your battallion to victory!!!

Why Order? Just take a look at the official trailer!

Finally!!! The Naruto series makes its first appearance on the Playstation 3 in Naruto: Ultimate Ninja Storm.

The game will cover the story of the original Naruto anime series. Featuring over 25 playable characters, a new style of cell shaded graphics, and 2 feature game modes:
Posted by Yagami at 4/14/2008 02:54:00 PM No comments: Links to this post 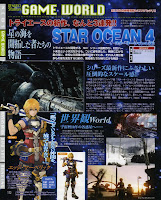 Revealed was the game's main character, a blonde hero with no background story just yet.

Square Enix has yet to announce what system(s) this game will be appearing on. While many of the Star Ocean games have all been exclusive to the Playstation, as of now, this one is unknown.
Posted by Yagami at 4/14/2008 02:19:00 PM No comments: Links to this post

To celebrate the release of Metal Gear Solid 4 Konami has announced this special Blu Tooth headset.

It is a grey over the ear light weight headset, that can be used not only for your PS3, but also computers and cell phones.

Retail price will be $69.99 and will be released right along with Metal Gear Solid 4: Guns of the Patriots.

Kaplan, Inc. has teamed with Aspyr Media to create an SAT prep game for the Nintendo DS. This would help students improve their studying by using the Nintendo DS and stylus. 2 other versions are being made for the PC and Mac, where studying programs have been prominent.

Currently, the software is being finished and does not yet have a name.

To fans of the Grand Theft Auto series, Rockstar has decided to reveal some tidbits about Grand Theft Auto IV's options. Rockstar will be revealing more information as we approach the game's release on the 29th.

According to Rockstar's Grand Theft Auto IV website, they released the following:

Playstation Store down for a new look

For those who own a Playstation 3 and are tired of the bland and simple look it has had for over a year, everyone can look forward to the next 2 days, well for the most part.

Today the Playstation store is down and out of service until sometime tomorrow early afternoon. Sony is completely reworking their interface.

So while you won't be able to download any movie previews or demos today, you can wait till tomorrow when the store goes back in service. Shortly after installing an downloaded update, everyone can finally enjoy the new look that Sony fans have been asking for.
Posted by Yagami at 4/14/2008 12:30:00 PM No comments: Links to this post