Final Fantasy X-2 is a console role-playing game developed and published by Square (now Square Enix) for Sony's PlayStation 2. It was released in 2003 and is the sequel to the best-selling 2001 game Final Fantasy X. The game's story follows the character Yuna from Final Fantasy X as she seeks to resolve political conflicts in the fictional world of Spira before it leads to war.

.hack//LINK, Also known as .hack//LINK Twilight Knights) is an extension to the .hack series. The story is told in manga with art by Megane Kikuya and original story by CyberConnect2. A PSP release of this title has been confirmed with pictures of the game itself in Famitsu Magazine. 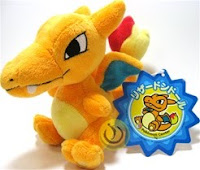 Charizard, is a Pokémon species in Nintendo and Game Freak's Pokémon franchise. Created by Ken Sugimori, Charizard first appeared in the video games Pokémon Red and Blue and subsequent sequels. They have later appeared in various merchandise, spinoff titles and animated and printed adaptations of the franchise. Charizard is voiced by Shin'ichirō Miki in Japanese and English. Known as a Flame Pokémon, Charizard are violent yet honorable creatures that fly proudly around the sky and constantly seek powerful opponents to quarrel with.