A few guys and I will be attending E3 next week to visit a few good old pals, make a few new buddies, and just have a blast in the exhibitor hall overall.

The Electronic Entertainment Expo, commonly known as E3, is an annual trade show for the computer and video games industry presented by the Entertainment Software Association (ESA). It is used by many video game developers to show off their upcoming games and game-related hardware. The new E3 Expo is run by International Data Group (IDG [1] ) instead of by ESA.

E3 is invitation-only since 2007, reducing the number of attendees from 60,000 at E3 2006 to the 3,000-5,000 of E3 2007. Starting in 2009, access is restricted to only retail employees with purchasing authority for the organization. A separate conference called Entertainment for All Expo has been created to accommodate the public demand for a major, annual video game event, however it has not been able to replicate E3's success.

E3 was previously held in the third week of May of each year at the Los Angeles Convention Center (LACC) in Los Angeles. In 2007, the convention was exceptionally held from July 11 to July 13 in Santa Monica, California. The ESA stated that the event reached a record attendance of 70,000 people in 2005.

E3 is widely regarded as the world's largest regular convention for video games. Video game companies generally spend more on their presentations for E3 than any other convention (including fancy decorations and pyrotechnics). Major video game critics often have a "best of E3" award session (similar to end-of-year award sessions), but only E3 consistently features such awards (for example, there is rarely a "Best of TGS" award session).

Our Price: $169.99
Release Date: 5/28/2009
UPC: A10001435
Genre: E-Capcom Goods
Company: Capcom
Version: Japan
I'm saving up a pretty large order from our supplier who has these E-Capcom Edition Gyakuten Kenji's. We have a few sitting in a warehouse, waiting to be shipped. I'll ship your pre-orders next week as soon as they come in. This is what's inside: 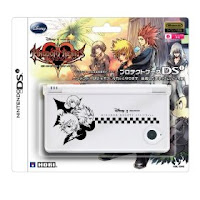 Price - $24.99
Release Date: 5/30/2009
UPC: 4961818010864
Genre: Accessory
Company: Square Enix
Version: HDL-246
Most of the pre-orders for the new Kingdom hearts case have been fulfilled. I spoke to Japan a few nights ago and secured a second batch, which is arriving most likely next Thursday. I have a few on reserve for some walk-in patrons, but if they cancel, they will be available again for retail store clients this weekend. I anticipate the case to have a slight shortage in the coming weeks. Any future orders placed 4 p.m. PST and beyond will ship next Wednesday/Thursday.

Price - $399.99
Release Date: 5/30/2009
UPC: 4988601006019
Genre: Hardware
Company: Square Enix
Version: Japan
Sorry folks, again, I have some good news and bad news. There is an extreme shortage of these DSi Kingdom heart units. We did receive some today, but at an extremely high pricing point. We have contacted various vendors to purchase these from retail shops and even folks who have purchased from retail shops. Doesn't seem like anyone wants to let them go for cheap. Even though we get price gouged, we'll still bring them in. For those who pre-ordered a few months back, please be on the lookout for an email to confirm at the new pricing point. We do sincerely apologize for the price increase. If the prices adjust the following week from a supply surge, we'll drop future batches back down.
Posted by Kbody at 5/29/2009 04:03:00 PM No comments:

Price - $79.99
Release Date: 2/5/2009
UPC: 4948872960717
Genre: Sony Computer Entertainment
Company: RPG
Version: Asia
I have some good/bad news and some bad news, I know that doesn't really make sense, but hear me out. Bad news first, the first batch that arrived this morning has already sold out. If you've reserved one with us in store, or placed an order online before 2 p.m. PST, you will be guaranteed the price of $69.99.

The good/bad news is - I had a second batch of demons souls ship out from hong kong a few days ago. I was expecting it monday, but it showed up surprisingly just a few minutes ago. Unfortunately, we had to pay $10 more per game, similar to our batches in early may. If you come in-store after 2:20 p.m., the price will be $79.99. Just half an hour ago, two gentlemen came and cleaned us out of our first batch.