This game will feature a new storyline in the Bleach continuity written for this game by Tite Kubo. Two shinigami, Matsuri Kudo and her brother Fujimaru, travel through time to the present day. In the living world, they will meet Ichigo Kurosaki and learn about the true intentions of their 5th Division Vice Captain Sosuke Aizen.

We have secured a deal that will allow us to price ps3 dual shock 3's at $39.99! This is an online deal only and will last for approximately one week. 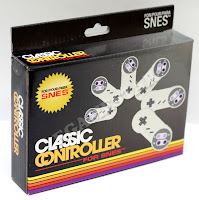 Snes controllers are back in stock! With newly designed packaging for maximum protection, these controllers will take it back!

The super 16 bit controller features 8 easy to reach buttons in a controller designed to fit the contour of your hands. More buttons allow for greater game control and even more game play excitement than ever before.

We just received word from our Japan vendors that the long awaited hori 360 ex turbo is available. We will be restocking this controller within 2-4 weeks. Last year, demand for this hori ex turbo drove prices well beyond retail, with every controller on the market snatched up as quickly as they were produced.

With another season gone, Hori has released another batch not too long ago to the general public. Pre-Orders are set at $59.99. Here are a few specs: