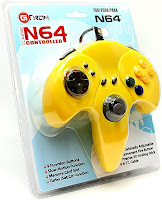 The controller for the Nintendo 64 was designed to be held in several different positions. It was designed around Super Mario 64. It could be held by the two outer grips, allowing use of the digital D-pad, right-hand face buttons and the "L" and "R" shoulder buttons (but not the "Z" trigger or analog stick). It could be also held by the center and right-hand grip, allowing the use of the single control stick, the right hand-buttons, the "R" shoulder button, and the "Z" trigger on the rear (but not the "L" shoulder button or D-pad). More often than not the analog stick was used in games while in some, both the control stick and directional pad could be interchangeable (ex: Mortal Kombat Trilogy). Very few games used the directional pad exclusively; two examples are the 3D puzzle game Tetrisphere and the side-scrolling platformer Kirby 64: The Crystal Shards. 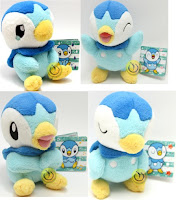 Piplup, in original Japanese language versions, is one of the three species of Pokemon players can choose from at the beginning of their adventure in the Diamond and Pearl versions of the series. 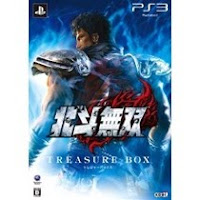 Hokuto Musō is a beat em up game created by Koei based on the Fist of The North Star Franchise. It was originally announced as a "mystery title" during the 2009 Tokyo Game Show as its story and characters are based on the famous Japanese comic and anime series. Hisashi Koinuma, producer of the Samurai Warriors series says that the staff aims to create a "new realistic feel" for the Fist of the North Star series while still being faithful to the original's roots. Tetsuo Hara and Yoshiyuki Okamura, the illustrator and writer of the original comic, has expressed their support and enthusiasm for the title. The game will be released in Japan on March 25, 2010 for the PlayStation 3 and Xbox 360 and considered as an official side spinoff to Koei's Warrior series. 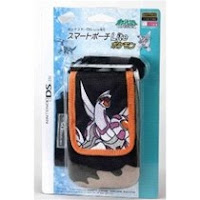 Palkia, known as the Spatial Pokémon, is a legendary Pokémon and part of the Legendary Dragon trio, along with Dialga and Giratina. It represents spatial matter whereas Dialga represents time and Giratina represents dimension. Palkia, like Dialga, has an appearance of a dinosaur. Palkia has wings on its back which can open up and purple stripes on its neck and tail. Palkia also has a pink pearl on each shoulder plate. In Sinnoh-region lore, it and Dialga are said to be created by Arceus, at which point time and space began to take form and matter began to take shape. According to Platinum, Palkia's breath keeps space and matter stabilized. Its signature move is "Spacial Rend", a slash of energy which tears through the enemies and has a high critical-hit ratio.