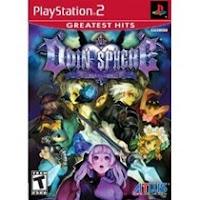 In Odin Sphere, players enact the story of their world's end. A great kingdom named Valentine was brought apart by natural disaster and internal strife. As war broke out, the once-great nation became a wasteland. As a demon lord named Odin schemes to conquer it, a far-off sorceror plans to use ancient magic that will bring an apocalypse. As the nations struggle for control, the world steadily slips unknowingly toward its demise, ancient prophecies are ready to be fulfilled -- unless a young princess named Gwendolyn can stop the bloody feud between nations and fight for unity.
Posted by jvgmichael at 7/15/2010 04:33:00 PM