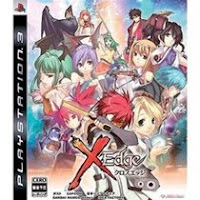 Cross Edge is the result of an unprecedented collaboration between five major Japanese game publishers. Nippon Ichi Software, Capcom, Namco Bandai, Gust, and Idea Factory have joined forces to create a Strategy RPG unlike any other and exclusive to PlayStation 3.