Now Capcom has decided to work with Arc System Works, which is best known for creating the Guilty Gear series, work together to bring you Sengoku Basara X (cross).

Stepping away from its traditional strategy hack and slash game, it steps into the world of Fighters, as your favorite characters like, Maeda Keiji, Toyotomi Hideyoshi and Oichi all fight each other to prove to the world who is the strongest fighter in the Sengoku world.

Also Avaliable is Sengoku Basara X Limited Edition quantaties are limited so get yours now! - $79.90

Daigasso! Band Brothers DX, will be released as the sequel to the Nintendo DS's Daigasso Band Brothers, that was released back in Dec. 2004.

Daigasso Band Brothers DX is a custom music game in which you are provided with over 50 instruments to create your style of music either by yourself or with friends anywhere in the world (Up to 6). Music brings everyone closer has never been so true.

The back of the GTA IV cover confirms that the game requires a tiny 3340KB of HDD space and supports 1080p. The big question that everyone is asking is whether it is native 1080p or upscaled. Either way, we'll all be in for a visual treat.
Posted by Yagami at 4/11/2008 01:42:00 PM No comments: Links to this post 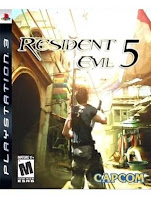 RE5 stars Chris Redfield of from Resident Evil 1, who has gone to Africa where many weird and mysterious things are happening, and its up to him to find out why and how to stop it.

While this game is very controversial, it many of its fans look past its problems and see it as just another Resident Evil Survival game. Fans are allowed to choose a method of killing either a single or a group zombie; and never knowing what is around the next corner.

Capcom released a statement explaining why they decided on selecting Africa as the location:

"We really wanted to show the origins of the virus. So for the setting we thought, how about using the place where humankind was born?...we thought we would use Africa, which is now called the birthplace of humanity, as the model."
Posted by Yagami at 4/11/2008 01:22:00 PM No comments: Links to this post

Wii, PS3, and Xbox 360 have been integrating downloads of games and download content, companies have been noting and taking advantage of this, Sony has commented, "Ten years from now the ratio of games sales will have gone from 90% in-store to 90% online."

In the future, we can expect to see only collectors picking up games from local shops, the other 90% will be downloaded by all die hard gamers.
Posted by Yagami at 4/11/2008 01:16:00 PM No comments: Links to this post