IRON MAN? Will it live up to its hype? YOU DECIDE. 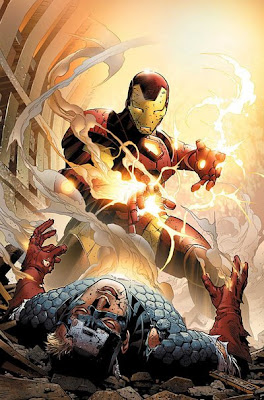 Based on the blockbuster movie by Marvel Studios, Iron Man™ blasts onto all major gaming platforms May 2008. Immerse yourself in hardcore shooting action and explosive combat from the film as well as exclusive content created just for the game. With freedom to move anywhere in the environment, customize your Iron Man suit and seamlessly transition between ground combat and open air flight as you battle against armies of fighter jets, tanks, armored Super Villains and more. You are a One Man Army. You are Iron Man.

Iron Man sheds light on some interesting new features that you will be able to play around with upon the game’s release. Gamers can expect the plotline of the game to remain the same as the movie, but with a few changes here and there to accommodate for the games structure. The Iron Man demo, not surprisingly, gives us an open world to work with on our missions and help players get used to the gameplay controls. In just the short time you take control of Iron Man, one 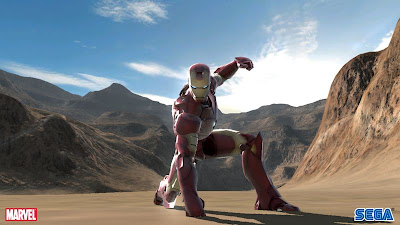 glaring thing you will notice is the flying ability. Iron Man’s flying ability is fun and should be very interesting once you are able to fly anywhere and complete missions throughout the story. Sega is definitely heading on the right track with this, so far.

One of the most interesting features of this game is the various Iron Man suits. According to Sega, as part of DLC, you will soon see some more exciting suits made just for the game going back to the classic days of the comic book series. It is clear, browsing through the menus, that you will be able to equip Iron Man with various items and upgradeable weapons. The weapons Iron Man holds are powerful and you will be using a lot of them. Various missions will require you to be quick on your feet. You will be faced with melee combat from troops on the ground and air-missiles from helicopters around the area. Each of these situations will require the use of the varied amount of weapons that appear to be included in the final game. 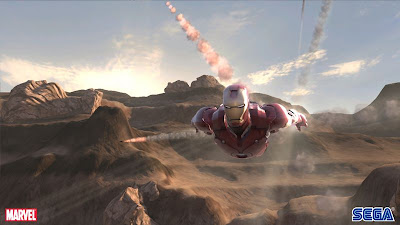 It is surprising how well Iron Man turned out to be in the graphic department. You can tell Sega put a lot of work into making Iron Man look exactly like his movie counter-part. Sharp graphics give way to excellent looking destructible environments and explosions. The game loads smoothly and textures and shading are of top notch. You won’t go wrong booting this game up on your HD set. Since this is an early copy, things can only get better. 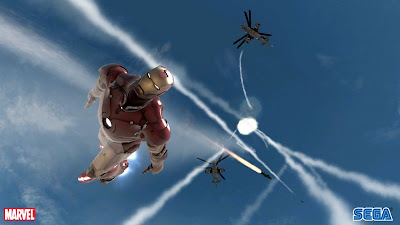 what Iron Man can bring, you do get to really scratch the surface with him. His control mechanics certainly felt like something you’d expect of Iron Man. The controls are not only ironclad, but take into account the weight of the suit as well with the “heavy” controls. To go into more depth of his flying abilities, camera angles are certainly something that you will have to adjust too. The camera angles don’t seem like enough of a problem that they will make or break the game. Making the game an open-world adventure seemed to be the right choice for Sega and will ultimately be the one dynamic that will determine how this game holds in the general feel.

ALL GAMES SHIP OUT ON May 2nd, 2008
visit WWW.JAPANVIDEOGAMES.COM for more info.


CLICK ON ANY PICTURE BELOW FOR THE SYSTEM YOU WANT YOUR GAME ON (in left to right order: PS2, PSP, NINTENDO DS, Wii, PS3, XBOX360): 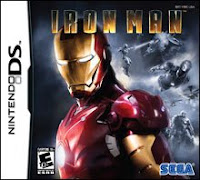 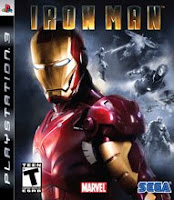 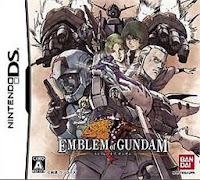 Bandai starts preorders for a new and NDS exclusive Gundam turn-based strategy game which follows the events that began in the Gundam 0079 timeline. The five works from which Emblem of Gundam draws its storyline are:

also make sure to check out our website at WWW.JAPANVIDEOGAMES.COM 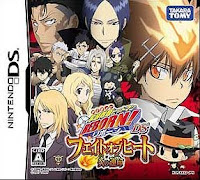 The cast of Hitman Reborn finds themselves in an RPG game which features card battling action where two sides fight it out in a conventional side-viewed encounters. Think of it as a gritty urban take on the RPG fighting style engendered by the Final Fantasy games. The first production of the game will include a set of five bonus trading cards featuring Hitman characters which will be given away by the manufacturer in 1:1 ratio. In other words, everyone gets the trading card love.

also make sure to check out our website at WWW.JAPANVIDEOGAMES.COM
Posted by Gamer4Life at 4/24/2008 02:19:00 PM No comments: Links to this post