It's that time of the year again! We want to thank everyone for your support last year, we definitely couldn't have done it without you. We're back this year, and this time, you'll have a much easier time finding us. We will be exhibiting at the los angeles convention center july 2nd to july 5th. Our booths are 457, 459, 556, 558.

If you were to walk into the exhibit hall, go down about 5-10 booths, bam, we're to the left, just like that.

For your convenience, we will accept payment credit cards (visa / mastercard / discover).

Price - $189.99
Release Date: 4/10/2009
UPC: HP2-263
Genre: Joystick
Company: Hori
Version: Japan
We secured another shipment of these hard to find arcana heart 2 hori sticks. They're expected to arrive within 1 week. Patrons can now order through the website at a lowered price of $189.99. Please keep in mind that the item bears a healthy dimensional weight, and UPS Ground is recommended to avoid a huge surplus of additional charges. Here are some more specs: 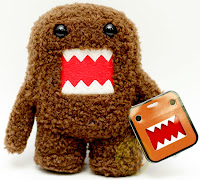 Price - $8.99
Release Date: 7/17/2008
UPC: 33100A-6
Genre: Plush
Company: JakksPacific
Version: US
I had a conversation with a Jakks representative almost a year ago about changes being made to the existing square domo. Shortly after I hung up, one week later, an ugly rounded version of the 6" domo was released.

We had no choice but to conform, but I can proudly say, after 9 torturous months of having to sell the rounder & uglier version of the 6" domo, a new re-released version came back.

Haven't we all seen people take random pictures of domos at work, holding pipes, dressed up in random clothes, laying sideways, and just any other situation thereof? Yes, yes. Orders placed today will ship within 24 hours.