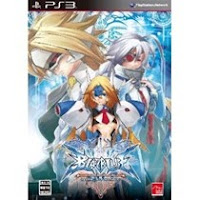 BlazBlue: Continuum Shift still retains it's traditional 2D fighter feel where two characters participate in a duel on a two dimensional plane. A round is called a "rebel" and one match can consist of one to five "rebels". To win a round, one player must either incapacitate the other by inflicting damage through various attacks to reduce health or by having more remaining health after the clock runs out if the rules of the match has one.

However, some mechanics from the previous installment have been changed or completely replaced in the transition.

Barrier Burst has been replaced with Break Burst, a similar ability but with different penalties. Break Burst can only be performed twice in a single match, and its second use can only become available if you lose a round. It no longer permanently drains your Barrier Gauge or gives you the "DANGER" penalty. A free unused burst is required for Astral Heats. Bursts have different properties depending on when they are used, as the offensive "Gold Burst" has high bounce and combo-ability and the combos initiated by it can kill while the defensive "Green Burst" will provide invincibility for the entire burst motion at the cost of permanently halving your maximum primer points. All lost primer points will never recover.