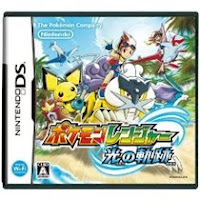 Gameplay revolves around capturing Pokémon with the Capture Styler, which now lets you call out your Pokémon for support. Other features include four player cooperative play with unique missions. The game also includes Wi-Fi mission downloads, one of which gives you access to Deoxys, which can be moved to the DS's other Pokemon games.