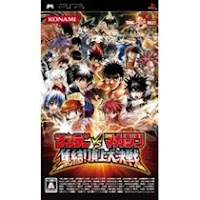 Sunday x Magazine: Shuuketsu! Choujou Daikessen! is a fighting game developed and published by Konami for the PSP to celebrate the 50th anniversary of shounen magazines Shōnen Sunday and Weekly Shōnen Magazine. 30 characters from both magazines will be playable with over 100 characters appearing as supports.
Posted by jvgmichael at 7/15/2010 01:40:00 PM