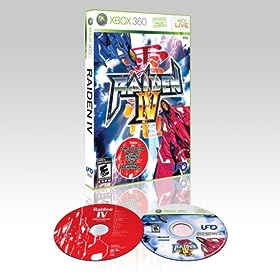 Our Price: $39.99
Release Date: 09/08/2009
UPC: 00695771500011
Genre: Shooter
Company: Tommo Inc
Version: USA
-from publisher-
THE ROAR OF THUNDER IS BACK! THE SERIES THAT CHANGED THE HISTORY OF ARCADE SHOOT'EM UPS IS COMING TO XBOX 360! Instill fear in your enemies with devastating attacks and earn the acclaimed title of Master Ace!

Our Price: $44.99
Release Date: 10/01/2009
UPC: 4988602145144
Genre: Adventure
Company: Konami
Version: Japan
-from wiki-
Shadow of Memories is a video game released by Konami in 2001. The American release of the game is called Shadow of Destiny. Shadow of Memories is the release title for the Asian and European markets.

Like its predecessor, the English version was re-branded as a Final Fantasy title due to the series' popularity in the Western world. The game's development was headed by lead designer Akitoshi Kawazu, who had worked on the previous title, with a music staff consisting of Kenji Itō and Nobuo Uematsu. In 2009, an enhanced remake of the game was announced for the Nintendo DS titled SaGa 2: Hihō Densetsu Goddess of Destiny, featuring three-dimensional graphics, new story elements, and an arranged soundtrack.