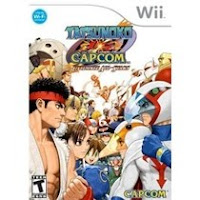 Tatsunoko Vs. Capcom Ultimate All-stars is a fighting game for Wii pitting a wide range of fan favorite characters from the Capcom game universe against anime characters from Japan's Tatsunoko Production. Packed with over-the-top action, loads of mini-games, four battle modes and multiplayer support that includes two player local co-op and online versus play, it is a unique gaming experience that is not to be missed by established and new fans of the Capcom universe and anime alike.