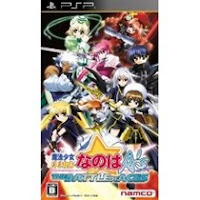 A nine-year-old wheelchair-using girl named Hayate Yagami forms a contract with the intelligent weapon named the Book of Darkness (whom Hayate later names Reinforce). As a result of this contract, four Belkan knights named Signum, Vita, Zafira, and Shamal appear in front of Hayate in order to fulfill the task of filling the pages of Book of Darkness by capturing magic from various sources. Once the pages of the Book are filled, its master, Hayate, will be able to make a single wish.