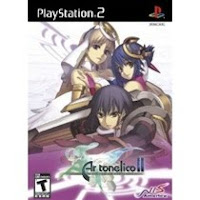 Ar tonelico: Melody of Elemia, released in Japan as Ar tonelico: The Girl Who Continues to Sing at the End of the World is a PlayStation 2 console role-playing game produced by Banpresto and Gust. There were other media releases based on the game, including the comic Ar tonelico -arpeggio-, the OVA Ar tonelico, and several drama CDs.