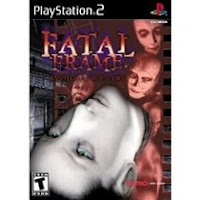 Fatal Frame, known as Project Zero in Europe and Australia, and as Zero 零 Zero in Japan, is a survival horror video game series, so far consisting of four games and a spin-off. The first and second games in the series were released for the PlayStation 2 and Xbox, the third game is only available for the PlayStation 2, and the fourth game has been released exclusively for the Wii. The series' plot deals with ghosts, exorcism, and dark Shinto rituals.

Created by Tecmo, Fatal Frame is one of the most well received survival horror games to date.