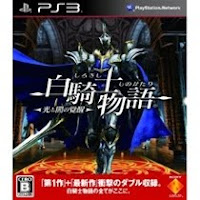 The game will allow the player to transfer their character from White Knight Chronicles along with equipments and guild ranks.