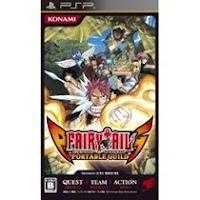 An action video game for the PlayStation Portable titled Fairy Tail: Portable Guild was unveiled at the 2009 Tokyo Game Show. The game is being developed by Konami and slated for release on June 3 2010. A fighting game for the DS, titled Fairy Tail Gekito Mado Shikkesen will be released on July 22, 2010.
Posted by jvgmichael at 7/10/2010 12:47:00 PM