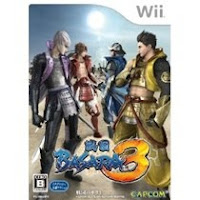 Sengoku Basara Samurai Heroes, known in Japan as Sengoku Basara 3​, is an upcoming 2010 action-adventure video game developed and published by Capcom for the PlayStation 3 and Wii. The game is the sequel to Sengoku Basara 2 and will be released on July 29, 2010 in Japan.