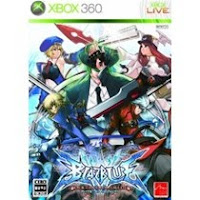 BlazBlue: Continuum Shift​ is a fighting game developed by Arc System Works. The game is an official Sequel to BlazBlue: Calamity Trigger. As with the previous game, BlazBlue: Continuum Shift will first come to arcades before both the Xbox 360 and PlayStation 3 versions as the game is currently released for the Taito Type X2 arcade system board, with a 16:9 ratio and 768p resolution. It was released in November 20, 2009 in Japan, though the North American version is not released in arcades. A console version was released on July 1, 2010 in Japan and will be released on July 27 in North America.

The game has undergone several revamped gameplay mechanics; features at least four new characters: Tsubaki Yayoi and Hazama (from Arcade version), μ-12 (Console-exclusive), and Makoto Nanaya (to be released via DLC) [1]; replaces the character, ν-13, with Λ-11; and rebalances previous characters with new or tweaked moves.