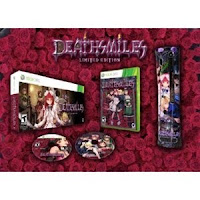 Deathsmiles is a side-scrolling shoot 'em up game for Xbox 360 full angels and demonic bosses. The first shooter developed by noted game developer Cave to be released for a game console in the US, Deathsmiles allows players to play as one of four female angels, using character specific powers to battle gothic and occult inspired enemies. Additional features include varying levels of difficulty, leaderboards and an online co-op mode. This limited edition includes an exclusive faceplate, CD soundtrack and boxart.

Enter the world of Gilverado, a kingdom plagued by hideous monsters and tortured souls. Choose from four angels with unique demonic familiars and battle against a storm of enemies pouring out of Hell’s gates. Fight your way out of tight spots as you are surrounded by enemy units and bullets from both sides of the screen. The unique left/right shooting mechanic of Deathsmiles will keep you on your toes as you dodge and weave through complex enemy fire, beautifully crafted by the game development team at Cave.