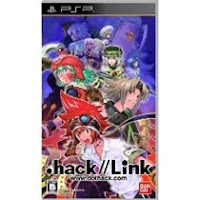 .hack//LINK, Also known as .hack//LINK Twilight Knights) is an extension to the .hack series. The story is told in manga with art by Megane Kikuya and original story by CyberConnect2. A PSP release of this title has been confirmed with pictures of the game itself in Famitsu Magazine.