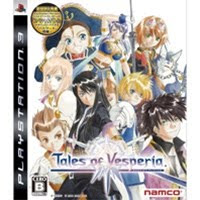 Tales of Vesperia will be ported to the PlayStation 3 in September 17, 2009 with additional content as well as a different logo. A PlayStation 3 port has been long rumoured and was finally leaked from the April issue of Shōnen Jump and was officially announced at a Tales Press conference by Namco Bandai on April 6, 2009. It is the second to be released in the Tales Line-Up of 2009, after Tales of VS, an escort title for the PSP, and before Tales of Graces, the new Mothership Title for the Wii. No Western release date has been announced. Tales of Vesperia PS3 demo was released July 13, 2009 in the Japan PSN store. A user named Kouli found data in the PS3 Demo that had already been translated into English, though it differs from the dual-language data found in the XBOX360 demo.