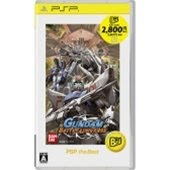 The fourth sequel of Gundam Battle series was released on July 17, 2008 in Japan. It features over 200 MS units (including F91 in Mobile Suit Gundam F91 and Ξ Gundam in Mobile Suit Gundam: Hathaway's Flash) can be selected; two UC stories (Mobile Suit Gundam ZZ and Mobile Suit Gundam: Char's Counterattack) become as a part of the campaign. On the other hand, every characters have 2 personal abilities (passive which is activated for all times and additional which is activated when player's HP gauge is at 30%). This game can inherit the Gundam Battle Chronicle's save data. The game also let players use the adhoc function to help each other in the normal campaign mode, unlike the previous games, which multiplayer mode is only available in the main menu.