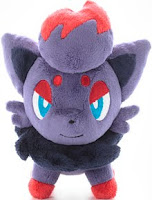 Zorua is a fox-like Pokémon, mainly slate-gray in coloration with red and black accents on its head and feet. Zorua's ears are triangular with dark insides, and it has a large, whorled scruff of fur on its head, tipped with red coloration. Its eyes appear to possess no pupils, and its eyelids and circular "eyebrow" markings are red. Zorua possesses a ruff of black fur around its neck, and limbs tipped with red. Its tail is bushy, and when it opens its mouth small fangs can be seen developing.