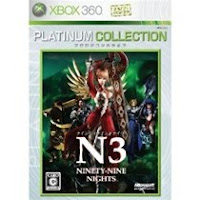 Video game designer Tetsuya Mizuguchi served as producer for the game. The game features hundreds of enemies onscreen at any given time, and borrows heavily from other video games of the genre, most notably from the Dynasty Warriors and Kingdom Under Fire series'. The follow-up, Ninety-Nine Nights II, was officially unveiled at Microsoft's TGS 2008 press conference.