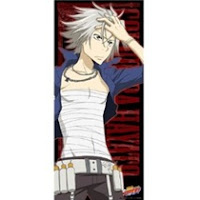 Reborn!, known in Japan as Katekyo Hitman Reborn!, is an ongoing Japanese manga written and illustrated by Akira Amano. The plot revolves around the life of a young boy named Tsunayoshi Sawada, who finds out that he is the next in line to become the boss of the most powerful Mafia organization, the Vongola Family. As such, the Vongola's most powerful hitman, a gun-toting infant named Reborn, is sent to tutor "Tsuna" on how to become a respectable boss.