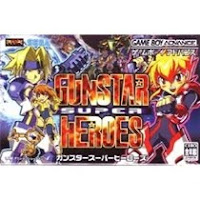 Gunstar Heroes is a run and gun video game developed by Treasure and published by Sega.