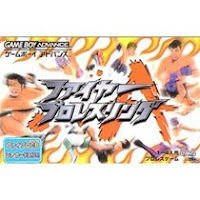 Fire Pro Wrestling is a long-running professional wrestling video game series originating from Japan, started in 1989 by Human Entertainment and continued by Spike in 2000.