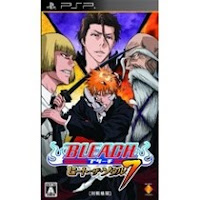 Bleach: Heat the Soul 7 is the upcoming installment in the "Heat the Soul" series to be released on September 02, 2010. The main change in this game is a 4-Players mode. There will also be battles against giant characters. Some characters that have been announced are Allon(Ayon), Harribel(Tiburon), Yammy(Ira), Ulquiorra(Segunda Etapa), Muramasa, and Full Hollow Ichigo.
Posted by jvgmichael at 7/13/2010 01:53:00 PM