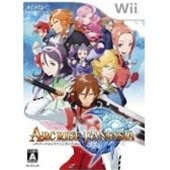 Arc Rise Fantasia is a fantasy role-playing game developed by imageepoch and published by Marvelous Entertainment for the Wii. It will be imageepoch's first game not developed for a handheld game console. Arc Rise Fantasia has been announced for release in Japan and North America in 2009. The game is a turn-based RPG. There will be three-character parties, with a single AP gauge being shared by the team, which empties as various actions are performed. Multiple attacks are possible, as well as massive attacks that will drain a lot of AP. If team members use the same skills, those skills will be increased. There are also summon beasts in the game called "Roguresu.