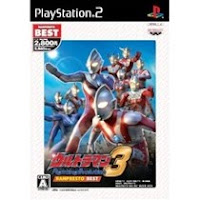 Ultraman pounds out the hurt once again in Banpresto's latest take on the popular action hero from Japanese pop culture. Baltan and all the usual oddly apportioned enemy creatures are in force where gargantuan fighters battle in all-out rough 'n tumble bouts. The controls seem identical to the previous Fighting Evolutions and the visual feast looks to be at the same level as before with polished scenery and cityscapes to fight within. Special moves and attacks have been redone however and look spiffy. The opening movie to the game shows off a row of Ultramen pitted against a similarly long line of monsters.