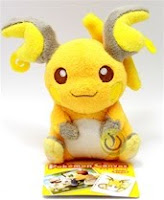 Raichu, known as the Mouse Pokémon, is a taller, potbellied form that Pikachu takes when a Thunder Stone is applied. Raichu is a rather small bipedal rodent. It's able to run faster on all fours. Like Pikachu, from which it evolves, Raichu has long ears and feet, and stubby arms. Also like Pikachu, Raichu has two horizontal brown stripes on its back.

Its long, thin tail has a broad, lightning bolt-shaped end, which is smaller and blunted on females. Raichu is yellow-brownish in color, with a white belly. Its paws are brown, as well as its toes. The soles of its feet are tan colored. Its bifurcated ears are brown on the outsides and yellow on the insides, and end in a distinctive curl at their bottom-most point. Its cheek sacs are yellow.