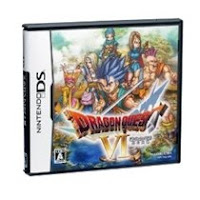 The story follows the traditional Dragon Quest "Hero" on a quest to save the world. In this particular installment, the heroes also have to endure the personal struggle of amnesia, as many of the main characters do not initially remember who they are. After completing a series of quests, the player learns that in addition to a Real World, there is also a Dream World, made up of people's dreams, and that there is a great evil that wants to conquer both.

The Hero and his new party work together to save both worlds from the ever-growing threat.