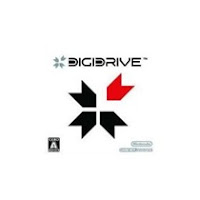 Digidrive is the 7th and final installment of the bit Generations series. Developed by Q-Games, it is the only game in the series not developed by skip Ltd.

The object of the game is to propel the disc-shaped core as many meters as possible before the piston collides into the core and ends the game. The player must direct up to three different varieties of "vehicle," each of a different color, into one of four different lanes. If five of the same vehicle fill up the same lane, a triangle will appear and the lane will change to the same color as the type of vehicle that entered this lane.